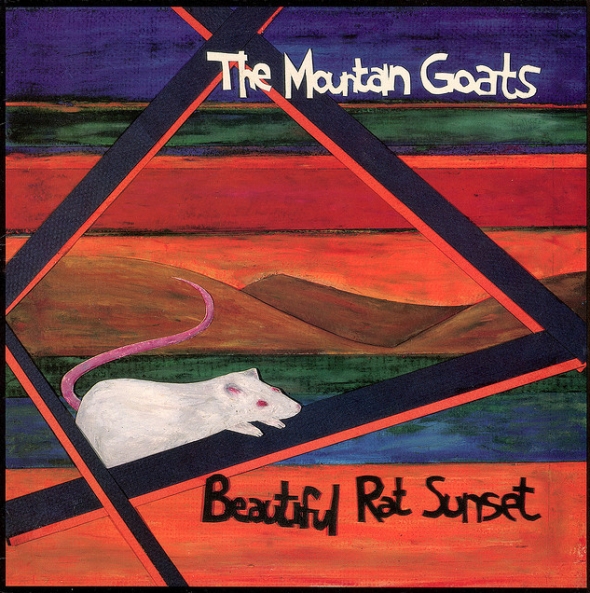 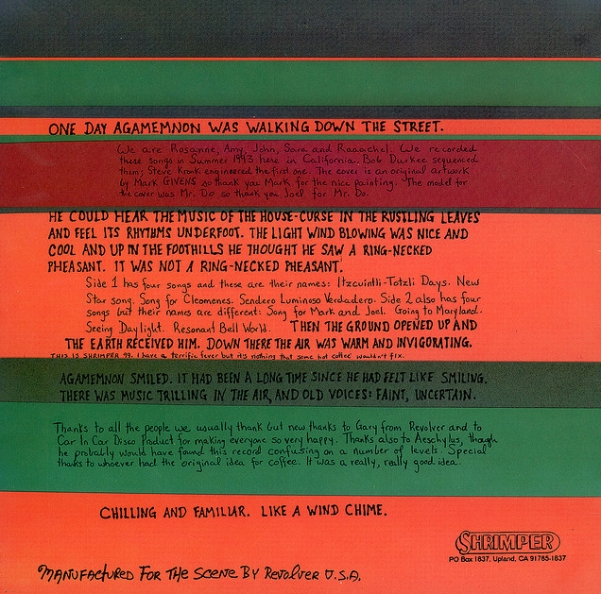 ONE DAY AGAMEMNON WAS WALKING DOWN THE STREET.

We are Rosanne, Amy, John, Sara, and Raaachel. We recorded these songs in Summer 1993 here in California. Bob Durkee sequenced them; Steve Kronk engineered the first one. The cover is an original artwork by Mark GIVENS so thank you Mark for the nice painting. The model for the cover was Mr. Do so thank you Joel for Mr. Do.

Side 1 has four songs and these are their names: Itzcuintl-Totzli Days. New Star Song. Song for Cleomenes. Sendero Luminoso Verdadero. Side 2 also has four songs but their names are different: Song for Mark and Joel. Going to Maryland. Seeing Daylight. Resonant Bell World.

THEN THE GROUND OPENED UP AND THE EARTH RECEIVED HIM. DOWN THERE THE AIR WAS WARM AND INVIGORATING.

THIS IS SHRIMPER 99. I have a terrific fever but it's nothing that some hot coffee wouldn't fix.

AGAMEMNON SMILED. IT HAD BEEN A LONG TIME SINCE HE HAD FELT LIKE SMILING. THERE WAS MUSIC TRILLING IN THE AIR, AND OLD VOICES: FAINT, UNCERTAIN.

Thanks to all the people we usually thank but new thanks to Gary from Revolver and to Car In Car Disco Product for making everyone so very happy. Thanks also to Aeschylus, though he probably would have found this record confusing on a number of levels. Special thanks to whoever had the original idea for coffee. It was a really, really good idea.

I hear the pads beat, loud as drums
I know he's coming, let him come

I hung pictures of you from every lamp post in town
As the humidity climbed into numbers I don't care to repeat
The air was heavy and the sky was alive
And the Pacific Starlight train 7 wasn't due in till 11:45

There were teenagers in mini-trucks coming around every corner
You could taste the adrenaline, coming out through their skin
I came to the well-lit doorway of a sheet music store
Saw my face in the glass, sat down in the doorway and I settled in

73 years before the advent of the Christian era
As Rome was taking over any land within reach
Setting up proxy governments in the conquered lands
There lived one such man given just such a job
Gaius Verres 11 — go!

A praetor held a position which operated on trust
He was to govern instead of the emperor himself
It was an easy, easy privilege to abuse
And Verres did so

He was the governor of Agrigentum which we now know as Sicily 12
And he stole everything that wasn't nailed down
Took improper advantage of other men's wives
The list goes on, trust me
Cicero wrote it all down

At Syracuse Verres welcomed a band of pirates
They all drank and danced and sang on the shore
And when the husband of one of Verres' paramours
Came bringing a fleet of boats with him
Verres, clever, if diabolical, gave him a job 13
And enlisted the pirates to burn the whole fleet down

As they age, men encounter the 6th fear — loss of virility. Just look him straight in the eye, invade his space by standing a little closer than normal... 15

And the screams of delight from the pool outside, the splashing sounds
The coffee heating up on the stove
The sky outside the color of pure fresh milk

And the impossible echo inside

When you put on your special coat
And you made your special lunge for my throat
Between you and me
It was, it was, really exciting

Innumerable thanks to the superb Thomas Fidler, also known as Drumhax on the Mountain Goats forums. These lyrics were annotated almost entirely by him, and he did a phenomenal job. He can be contacted at thomasfidler at Google's popular email service dot com.