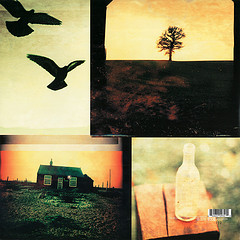 thanks to the Essenes 4 and peace to the scribes 5.

Early preorders of The Life of the World to Come came with a bonus CD of demos to much of the album (all but 1 Samuel 15:23 and Ezekiel 7 and the Permanent Efficacy of Grace), both extras, and several outtakes (namely Daniel 12:8 (third) and Matthew 11:14 – 19), called The Life of the World in Flux. An alternate demo of Daniel 12:8, Daniel 12:8 (first), was later released online. An identically titled limited live film DVD was also available. A studio version of Proverbs 6:27 is available on downloads of the album from Amazon, while one for Enoch 18:14 is available on downloads from iTunes. Finally, Bride is an outtake.

And as word spread of my powers, they would seek me far and wide
All sad faces at my window, I would welcome them inside
I sewed clothes for them
Cloaks and capes
Go down to the netherworld
Plant grapes

Pulled off the highway in Missouri and lo, our hearts were heavy-laden 14
Made for the chapel with some spraypaint for all the things we'd held in secret
Lord, lift up these lifeless bones
Light cascading through the windows, all the rainbow's heavy tones
He has fixed his sign in the sky 15
He has raised me from the pit and set me high 16

Head down toward Kansas, we will get there when we get there, don't you worry
Feel bad about the things we do along the way but not really that bad
We inhaled the frozen air
Lord, send me a mechanic if I am not beyond repair
He has fixed his sign in the sky
He has raised me from the pit and he will set me high

Touch nothing, move nothing, stand still
Keep my ears open for cars
See how the people here live now
Hope that they're better at it than I was

Well, the path to the palace of wisdom 26
That the mystics walk
Is lined with neuroleptics 27
And electric shocks

And nice people said he had gone home to God now
Safe in his arms, safe in his arms
But the voices of the angels singing to him in his last hours with us
Smoke alarms, smoke alarms

Hold them close, hold them near
Tell them no one's ever going to hurt them here
Steal the treasure and try to leave town
Fight my way back down

Don't want to hurt anyone
Probably gonna have to before it's all done
Take to the hills, run away
I'm going to get my perfect body back someday
If not by faith then by the sword
I'm going to be restored

I remember seeing you, my tongue struck dumb
When you first came here from wherever it was you came from
The power in your voice, your rough touch
You keeping care of me, keeping watch

For several hours we lay there, last ones of our kind
Harder days coming, maybe, I don't mind
Sounds kind of dumb when I say it but it's true
I would do anything for you

Try to think of ways to fix myself but everything ends in a cul-de-sac
The beast broke from the barn while we were sleeping, face it, face it, he's not coming back
Don't see what the point is in even trying to fight
Look for the bigger picture when I close my eyes real tight

And I am an airplane tumbling wing over wing
Try to listen to my instruments, they don't say anything
People screaming when the engines quit
I hope we're all in crash position when we hit

And then came to your bedside
And as it turns out, I'm not ready
And as though you were speaking through a thick haze
You said hello to me
We all stood there around you
Happy to hear you speak
The last of something bright burning, still burning
Beyond the cancer and the chemotherapy

The sun above me and the concrete floor below
Scratch at the chain links, maybe bare my teeth for show
Fed twice a day, I don't go hungry anymore
Feel in my bones just what the future has in store
I pace in circles so the camera will see
Look hard at my stripes, there'll be no more after me 53

Laze by the shoreline while the sailors disembark
Scratch out a place to sit and rest down in the dark
Smell something burning downwind just a little ways
They set up camp and sing and sweat and work for days
I have no fear of anyone, I'm dumb and wild and free
I am a flightless bird, and there'll be no more after me 54

In Costa Rica, in a burrow underground
Climb to the surface, blink my eyes, and look around
I'm all alone here as I try my tiny song
Claim my place beneath the sky but I won't be here for long
I sang all night the moon shone on me through the trees
No brothers left, and there'll be no more after me 55 56

If my prayer be not humble make it so
In these last hours, if the spirit waits in check, help me let it go
And should my suffering double let me never love you less
Let every knee be bent, and every tongue confess 59

I read the magazines somebody brought
Hold them to my failing eyes until my hands get hot
And when the nurse comes in to change my sheets and clothes
The pain begins to travel, dancing as it goes

If my prayer goes unanswered that's all right
If my path fills with darkness and there is no sign of light
Let me praise you for the good times, let me hold your banner high
Until the hills are flattened and the rivers all run dry 60

I saw some old friends as I came to the city gate
They asked me where I'd been of late
I hadn't been anywhere, but what was I going to say
Two hopeful people, looking at me that way

We stood in the sunlight, and they asked me where I'd been
Held the gate open, and told me to come on in
I saw the damp green grass, so nice on the other side
Couldn't explain myself to them, but I tried

The ground was dry but giving, the sky was nearly black
Saw some old friends when I looked back
Remember my old home, haven't forgotten yet
What happens on the day when I forget

Thanks to Caliclimber, from whose excellent Flickr page I took the album art, to Harrison Lemke for pointing out additional Biblical references in Psalms 40:2 and Isaiah 45:23, to AKM Adam for correcting the lyrics of Romans 10:9, to Mairead Beeson for noting the reference to Blake in Philippians 3:20–21, to Dan Coffey for mentioning the town of Clear Lake near Ames, Iowa, and to Sam Duncan for noticing the link to Isaiah 56:7 in 1 Samuel 15:23.