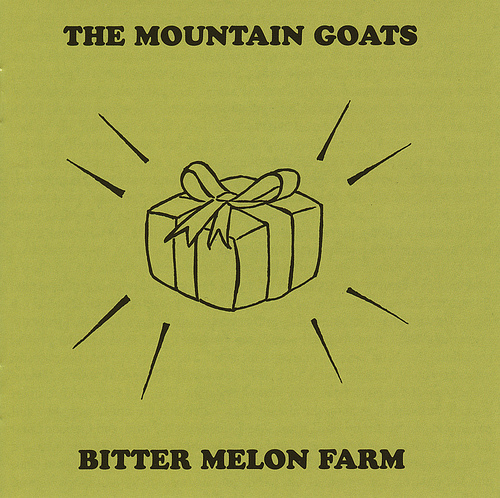 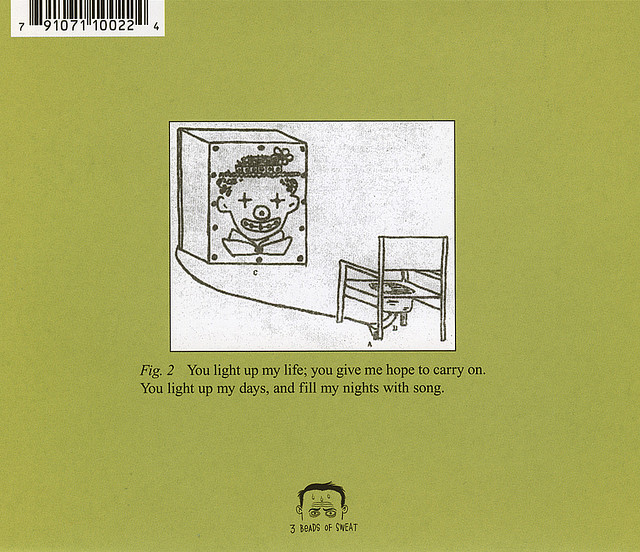 YOU GOT ANY GUM?

I was in a Sam Goody's 3 in Ames 4 thumbing through the bargain bin when I saw what I'd been looking for: Robert Redford narrating field recordings of the sounds of the North American wolf. 5 This was the same record that my grandmother got for free when she renewed her subscription to National Geographic back in 1974, and its cover was forever burned into my brain — the black mountain, the yellow sky, the silhouette of the wolf howling at the setting sun. That the record had ever been made bore witness to a different time, one whose nature is hard to describe but which has to it a very distinctive taste. It's the same taste that rises in your throat when you see the footage of that guy trying to set the water speed record on Loch Ness in '74 or '75 6 — the speedboat's moving, and it's moving faster, and then it's really hauling ass, and then it does a quick flip in the air and submerges itself beneath the inky water in the blink of an eye.

I remember watching that footage on my grandmother's television, sitting on the floor in her bedroom, the ceramic owl atop her space heater glowering down at my eight-year-old body seated cross-legged way to close to the screen. Suddenly the mysterious Loch Ness Monster 7 was being represented as somehow dangerous, something that hadn't ever occurred to me at all. The theory ran that the monster was angry about the loch being too noisy and crowded all the time, and had intentionally upset this guy's boat. They slowed down the film, and they zoomed in on a small dark disturbance on the already dark water, and the music was slow and minor and punctuated by shrill strings. As I remember the film, and the room, and the sounds of my grandmother fixing dinner in the kitchen two rooms over, the image gets grainier in my mind, the voice of the narrator lower and harder to hear, and the dust on the screen of the television becomes vivid, as though viewed through a high-power microscope lens surgically grafted to the mind's eye. The presentation becomes as ominous as it was then attempting to be, but it becomes so for reasons quite different from those its producer had in mind. It is the same year that an underwater submarine will take a picture of what its pilots will claim was a gigantic unidentifiable body sailing quickly past its camera, but the picture will look like a close-up from a pornographic film, all pink and moist and triangular. 8 They will say it's a fin. I will be unable to interest my friends in this, except for Brian Plummer, who will have left town by the middle of the year.

For some reason the songs on this collection of singles and strays remind me of all that — they are like a voice saying "Give me some of that" without any visible referent. Most of you have never eaten a bitter melon. I recommend that you go to your local Asian market, buy a few, and ask whoever's at the counter how to cook them. Then go home, follow the cooking instructions you've received, have a seat near the stereo and make what you will of these songs while you eat. I recommend a little cayenne pepper to offset the bitter taste. In the end I did not buy the CD of Robert Redford narrating the sound of the American Wolf, preferring to spend the rest of my life wishing I had bought it. Some pleasures are more subtle than others. I hope you find that to be the case with the songs herein.

Thanks to the usual suspects, though I'd like to remember especially the people who initially released these difficult songs. Peter Hughes, of course, and Gregor and Herwig; Jeff Smith, Jeff Fuccillo, and WPRB, and Jason Rothenberg; Jonas Sevenius and all our friends in Sweden; Dan and Danielle Varenka; Jon Nall, who would like to remind you that UNC completely blows; and Dennis Callaci, whose early intercession is the only reason that any of this ever saw the light of day. Front cover: "This box for you. It is Happy Box," ink on 20-pound bond by Lalitree Darnielle. Ten bucks says my wife can kick your wife's ass. The Mountain Goats burn and endorse incense from House of Mohan, 9 PO Box 64407, Washington DC 2009, who'll send you a brochure which, among other things, explains in a completely bitchin' one-page photo essay how essential oils are made; the Mountain Goats order and read poetry sold at a discount from Spring Church Book Company, PO Box 127, Spring Church PA 15686, 9 who'll be more than happy to find any book of poetry you might want to get and who are a small, friendly business deserving of your patronage. They will send you a catalog if you ask them for one. The Mountain Goats have always wanted to give out free plugs to people whose good, fair business practices — oases of goodness in a weary world filled with faceless corporate monoliths — warrant it, but have always let aesthetic considerations get in their way until now. The Mountain Goats use and endorse the third person plural and will do so until the cows come home. The Mountain Goats persist in the belief that eventually the cows will in fact come, and that they'll stay home once they get there. All songs written by John Darnielle © 1999 and ℗ 2002 by Cadmean Dawn (ASCAP, except for "Sail On," which is by the Commodores, and "The Sign," which God channeled through Ace of Base. If you've made it all the way down here to the bottom, you get the bonus question: if there's a mirror standing at the end of the universe, will radio waves eventually bounce off of it and make their way back to us, and is this the only way in hell that commercial radio's every going to be any good again? Send your answers to every radio station in your country and I'll see you next year in Pompano Beach. 10

Bitter Melon Farm compiles songs from three Mountain Goats releases: Transmissions to Horace, Songs for Petronius, and Songs for Peter Hughes. The remaining eight songs are taken from eight old and rare compilation releases, I Like Walt, You and What Army?, Howl, In Release City, I Present This, The Wheel Method, Dog So Large I Cannot See Past It, and Those Pre-Phylloxera Years.

The glowing world, the bench backed up against the house
The chicken coops, the darkness surrounding everything

And all the birds were sleeping in their perches
A little wind, swaying birches
And the North American wild turkey that your father brought home
Woke up and came toward us

In the morning
You come my way
Your skin is pink
The sky is gray
There's fresh cranberries
In your mouth
And thick red water
Dripping out
You expect me to believe
Everything you say
Well, OK

Red, red
Red everywhere
Bright red all along
The thin canvas wall
I stepped outside
For a little air
Stepped outside
To get away from it all
Went out through the front
I saw the purple sky
Making jokes about my condition

Going to Cleveland is annotated with Transmissions to Horace.

Early Spring is annotated with Transmissions to Horace.

Historiography is annotated with Transmissions to Horace.

No, I Can't is annotated with Transmissions to Horace.

Alpha Desperation March is annotated with Transmissions to Horace.

Going to Monaco is annotated with Transmissions to Horace.

Star Dusting is annotated with Transmissions to Horace.

Teenage World is annotated with Transmissions to Horace.

Going to Santiago is annotated with Transmissions to Horace.

Sail On is annotated with Transmissions to Horace.

Siamese fighting fish 26 flashing like sparklers
It started to rain
And the telephone rang a couple of times
I put a bullet through its cold, dead brain
And I got out my photographs of you
And I put bullets through all of them too

Drop by drop
Gallon by gallon
Brother, if I could sing
If I could sing like Allen
You would know and understand
How sad it was
When the rain came down

The Bad Doctor is annotated with Songs for Petronius.

Alpha Double Negative: Going to Catalina is annotated with Songs for Petronius.

Pure Intentions is annotated with Songs for Petronius.

The Lady from Shanghai

The Lady from Shanghai is annotated with Songs for Petronius.

Pure Love is annotated with Songs for Petronius.

The garter snake passed lazily through the tall yellow-headed sourgrass
There was cold, clear water in a tall, clean glass
Sunlight hit the sides and it came through the water tilted
I saw the condensation on your hand, I could feel the glaciers melting
And a warm, soft wind
Covered up everything
On the day your love came screaming through me

You had oranges and lemons in a canvas bag beside you
And seven different kinds of light welling up inside of you
You smeared citrus pulp all over me, it felt OK
And good old East Rutherford 35 three thousand miles away
I felt a warm surge blast my mind
Coming in from behind
On the day your love came screaming through me

Somewhere in the damn forest
Where the fat vines look like my brother's arms
Thick and ripe
I'm trying to get out for days and these green vines keep getting in my way
I came up to a clearing
Where the cross currents cooled my face
I would have sat down there in the middle
I would have rested just a little
But for the fire-bellied toads 41
See, the ground was wet and they were everywhere
Fire-bellied toad number five
From what may or may not have been a limited series
Opened up his little mouth
As though to speak, and then he spoke
And then he spoke to me
And he said, "You can't holler down our rain barrel
You can't climb our apple tree
I don't want to play in your yard
If you won't be good to me" 42
Honey, it was downright creepy

Short Song About the 10 Freeway

Short Song About the 10 Freeway is annotated with Songs for Peter Hughes.

No, I Can't is annotated with Songs for Peter Hughes.

Song for Dana Plato is annotated with Songs for Peter Hughes.

The Sign is annotated with Songs for Peter Hughes.

Thanks as always to Caliclimber, whose Flickr page provided the album art and who painstakingly transcribed the liner notes.