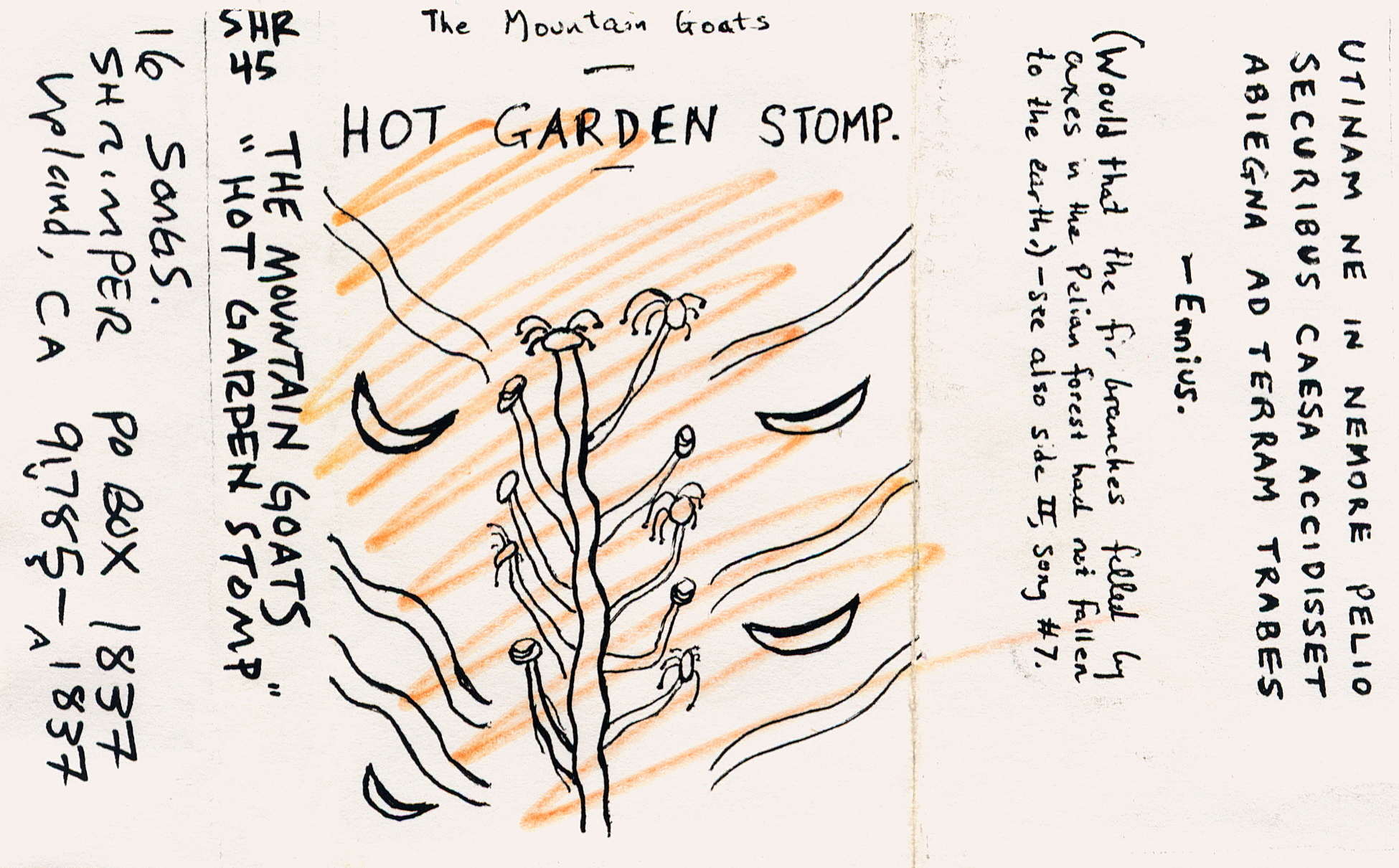 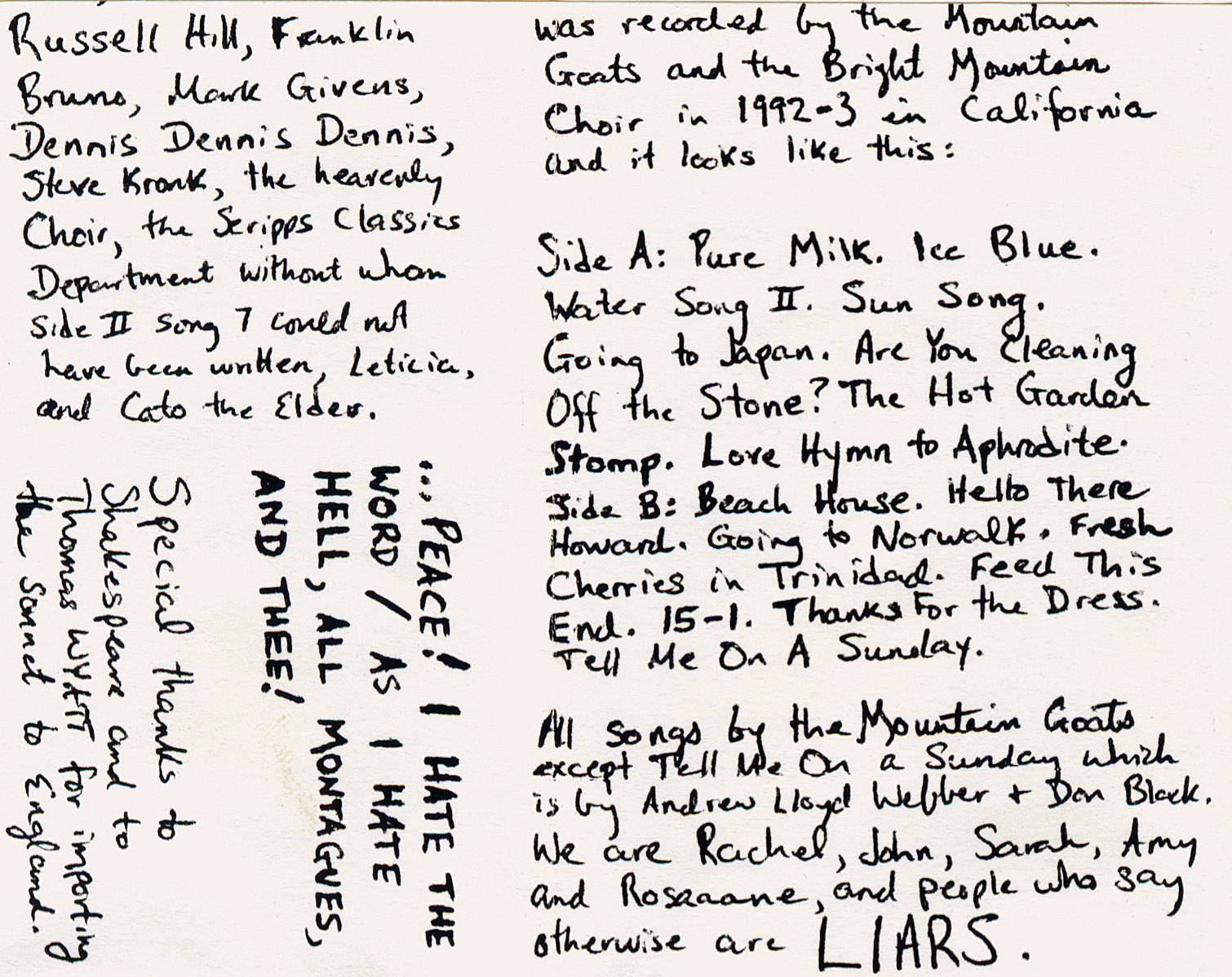 Apologies, but I haven't had the chance to annotate this album yet — if you'd like to help, please email me! This page is just a placeholder so that you can read the lyrics. Full annotations, liner notes, and the rest will come when the page is fully annotated.

(Would that the fir branches felled by axes in the Pelian forest had not fallen to the earth.) — see also side II, song #7.

was recorded by the Mountain Goats and the Bright Mountain Choir in 1992–3 in California and it looks like this:

Side A: Pure Milk. Ice Blue. Water Song II. Sun Song. Going to Japan. Are You Cleaning Off the Stone? The Hot Garden Stomp. Love Hymn to Aphrodite.

Side B: Beach House. Hello There Howard. Going to Norwalk. Fresh Cherries in Trinidad. Feed This End. 15–1. Thanks For the Dress. Tell Me On A Sunday.

All songs by the Mountain Goats except Tell Me On a Sunday which is by Andrew Lloyd Webber + Don Black. We are Rachel, John, Sarah, Amy, and Rosaaane, and people who say otherwise are LIARS.

Russell Hill, 1 Franklin Bruno, Mark Givens, Dennis Dennis Dennis, Steve Kronk, the heavenly Choir, the Scripps Classics Department without whom Side II song 7 could not have been written, Leticia, and Cato the Elder.

Special thanks to Shakespeare and to Thomas WYATT for importing the sonnet to England.

The songs you find on this compact disc originally appeared on two cassettes. To elaborate further about that — to say, for example, that the songs originally appeared "on two cassettes that were released in ____ and ____" — would misrepresent the spirit of their time. These tapes did not have release dates. No-one anticipated their coming into the world, and very few noticed or cared. Among those who did, reaction was fairly evenly split. Some people thought these tapes were kind of cool. Other people thought they sucked. One can make, without much effort, a good case for either side of the proposition.

All previous eras cross at some point into the territory of the unimaginable, and so it is with the days of tape-trading. The obscurity in which these songs were incubated & born & brought into their faint light is a state of being which has passed into history. I don't keep diaries and I have a pretty hostile mistrust of nostalgic impulses, so anything I remember about these songs is shaded by having grown from the excitable young would-be poet & terrible guitarist who wrote them into the excitable less young would-be poet & improving guitarist who writes today. If I could speak to that younger writer, I would explain patiently to him that stalker narrators are neither interesting nor edgy, so he might want to refrain from writing "The Garden Song," lest his feminist activist older self feel embarrassed in the future. Through the impenetrable calcite wall of time I am pretty sure I can hear the younger writer responding that he sees my point, but that there is also a song about cows.

Recorded in Norwalk, Claremont, and Irvine.

Hot Garden Stomp was reissued in 2012 by Shrimper as a compilation with The Hound Chronicles. Other than including new liner notes and being in CD format, the content was identical.

The sky was pale
The day was gloomy
Boy, your eyes burned through me

I brought my friend, here he comes
Splashing and gurgling for you
Now the water runs through the streets unimpaired
Crashing through

They'll be saying your name
Every voice different, every word the same
They'll be holding you up
Too close to the sun, but I will make them stop

I brought my friend, here he comes
Splashing and gurgling for you
And now the water runs through the streets unimpaired
Rushing through

Still start singing, 3 and you'll stand in the light
When my friend gets here he will set things right
They'll be singing for one thing and they'll get this instead
Let them come and get me, let them strike me dead

I brought my friend, here he comes
Splashing and gurgling for you
Now the water runs through the streets unimpaired
Rushing through

And I brought my friend, here he comes
Splashing and gurgling for you
And now the water runs through the streets unimpaired
Rushing through

There's life and liberty on my tongue
And there's a dead silence where the wind chimes hung
And on some mountain somewhere in the world it's snowing
But here in the fields there's not a thing growing
Maybe next year, you know, there is no way of knowing
There's wind coming from all directions
There's a coat on my shoulders, midnight connections
I'm kissing you and leaving you behind in the sand
I'm holding you a while and then I'm going to Japan

Are You Cleaning Off the Stone?

You were quiet for a while and that was nice
They you came along with your questions, always questions
I don't have any answers
For those particular questions

"The actual date is the 17th of April. Love Hymn to Aphrodite."

The sunset gets a little longer every night
And it's no good, but I feel all right
The sky turns orange and the colors start swirling
You float downstairs, your body spinning
In perfect circles
It's the 18th of July
What, what are you doing 4

I get letters telling me since I moved away
You've taken to hanging out on that rock about a mile from shore
Given what I know about that rock, namely, that it's populated by seals
I'd strongly suggest to you that you not hang out there anymore

Now when I say that the seal is vicious, I use the term advisedly
According to Webster's 9th New Collegiate, definition 4b
States that vicious means, "marked by ferocity"
And offers as a synonym, "savage"

And the little white spots gleam like stars
The guy on my right gets a look at the stick man
And he begins to sense where it is that we are
And the table's hot
And so am I
And I grab the bones and I let 'em fly
So come 2, come 3, come 4, come 5, come 6, come 7, come 9
It doesn't matter to me now 'cause I got all kinds of time

At 1:30 on a Thursday night
I saw a pair of raccoons heading to the gutter
They stopped at the storm drain
Their tails hung down and out of sight
They looked up at me
Their eyes were shining
I thought of you

When the water on the window lit the sunlight through
And I got a good look at you
Standing above me bright and tall
There are no words for it, there are no words at all
I saw
Fresh cherries
Hanging from your fingers

Stood near the cage of the prize-fighting cock
Sun cut through the clouds but the air pressure dropped
And I touched your hair for the very first time
I have that moment with me now, it's all mine

A few minutes later you went back inside
And I stood near the clothesline where strips of beef dried
Hanging in the noonday sun, flies were buzzing nearby
And then your face in the window caught my eye

Things don't look much different now from where I stand
Looking for you, camera in hand
Someone's gone away, and someone's gotten taller
But the world stopped turning, and the universe is much smaller

Yeah, you showed me a thing or two about power
In its purest form

Thanks for the Dress

Tell Me on a Sunday

I'd like to choose
How I hear the news
Take me to a park that's covered with trees
Tell me on a Sunday, please

Let me down easy, no big song and dance
No long faces, no long looks, no deep conversation

I know the way
I want to spend that day
Take me to the zoo with big chimpazees
Tell me on a Sunday, please

Don't want to know who's to blame, it won't help knowing
I don't want to fight day and night, it's bad enough that you're going
Don't leave in silence with no words at all
Don't get mad and slam the door, it's no way to end this

I know how I
Want you to say goodbye
Find a circus tent with a big trapeze
Tell me on a Sunday, please

I don't want to fight day and night, it's bad enough that you're going
Don't leave in silence with no word at all
Don't get mad and slam the door, it's no way to end this

I know how I
Want you to say goodbye
Go right off in the pouring rain
Don't call me as they call your plane
Take the hurt out of all the pain
Take me to a park that's covered with trees
Tell me on a Sunday, please

Thanks to Caliclimber, praise be upon his name, whose Flickr page provided the album art.