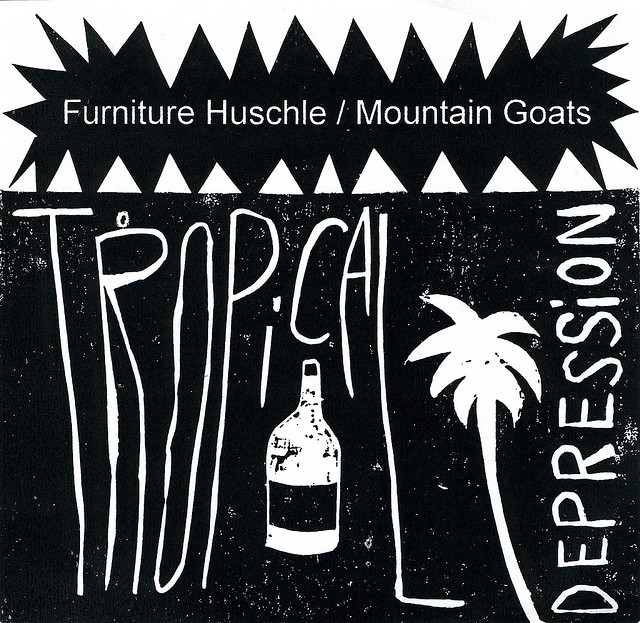 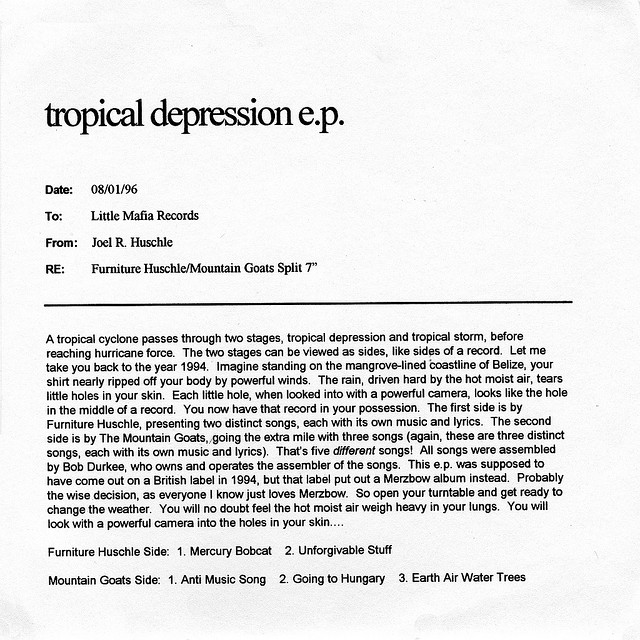 A tropical cyclone passes through two stages, tropical depression and tropical storm, before reaching hurricane force. The two stages can be viewed as sides, like sides of a record. Let me take you back to the year 1994. Imagine standing on the mangrove-lined 5 coastline of Belize, 6 your shirt nearly ripped off your body by powerful winds. The rain, driven hard by the hot moist air, tears little holes in your skin. Each little hole, when looked into with a powerful camera, looks like the hole in the middle of a record. You now have that record in your possession. The first side is by Furniture Huschle, presenting two distinct songs, each with its own music and lyrics. The second side is by The Mountain Goats, going the extra mile with three songs (again, these are three distinct songs, each with its own music and lyrics). That's five different songs! All songs were assembled by Bob Durkee, who owns and operates the assembler of the songs. This e.p. was supposed to have come out on a British label in 1994, but that label put out a Merzbow 7 album instead. So open your turntable and get ready to change the weather. You wil no doubt feel the hot moist air weight heavy in your lungs. You will look with a powerful camera into the holes in your skin...

The Mountain Goats half of Tropical Depression was included on the compilation Ghana.

We headed out, sweat drying on our bodies
And I got all sentimental
We were heading straight to hell
In a Lincoln Continental 17

Through the shifting colors in the sky
I heard the wild geese call
And the light was bright and clear and cold
Over eastern Montreal 18
And although I know
You're only toying with me now
And although you hold
Your affection from me like a bone on a string
I love you, I love you because
You gave me sausage and cheese
When I was hungry

But you hold your closed hand out to me
You told me to guess what you had inside
And I had a thousand guesses and some of them were good
But I knew for sure that I was losing my mind
When the scent came rising
Through the spaces between your fingers
When the scent called to me
And I knew we'd last at least 'til the end of December
And I love you, I love you because
You gave me sausage and cheese
When I was hungry

Thank you, Caliclimber! Your Flickr page continues to amaze me, and I greatly appreciate you letting me use the cover art here.