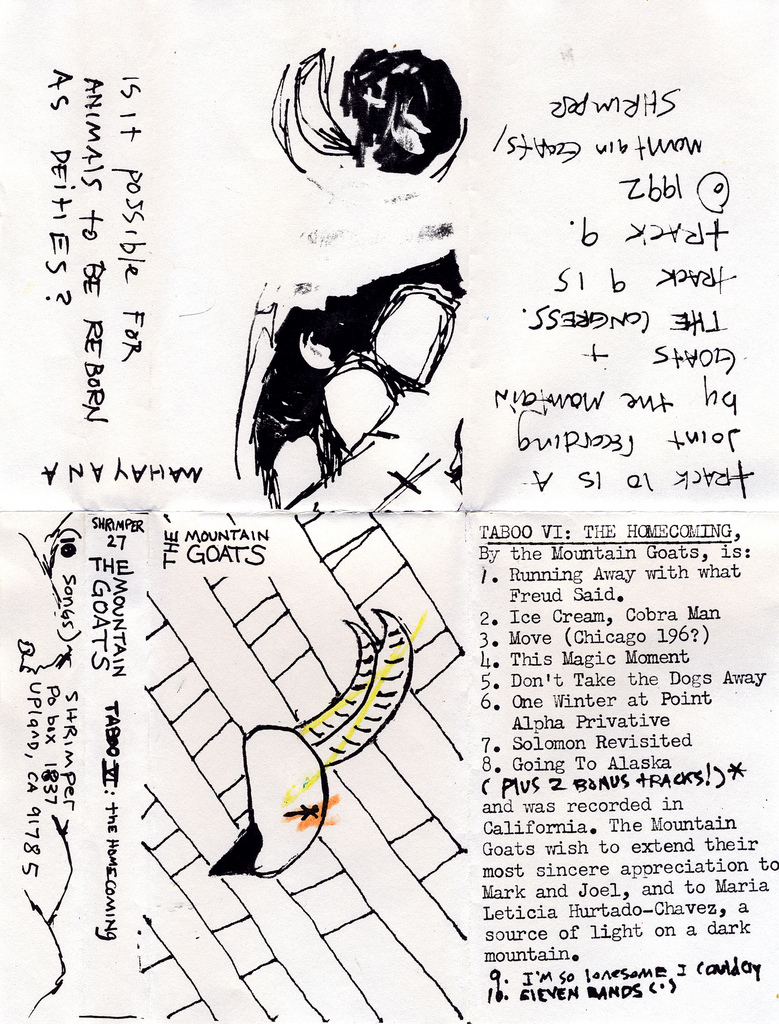 By the Mountain Goats, is:

and was recorded in California. The Mountain Goats wish to extend their most sincere appreciation to Mark and Joel, and to Maria Leticia Hurtado-Chavez, a source of light on a dark mountain.

Track 10 is a joint recording by the Mountain Goats + The Congress. Track 9 is track 9.

Is it possible for animals to be reborn as deities? 6

Running Away with What Freud Said 7 8

Same 11 morning, world breathing
Far, far from home
Big ringing in the bones
Whose bones are these — God please
Feel the pumping, feel the fresh blood pump inside
City's living,12 the city's truly living
What's the difference, running away with what Freud said

"I think a lot of women aren't willing to perform analingus immediately, they have to be sort of told or invited to it. I think they neglect it as being a erogenous zone on a man. I enjoy having my asshole licked during a 69 position while I am devouring her myself." 14

I feel no pain
As I float across your ceiling
And I, I have no shame
I am in a thousand rooms all at the same time
Yeah, and I have a glass
Filled with water and light and I feel good tonight
I am climbing up this mountain
You can watch me
You can watch me

"Um, I just enjoy it very wet, and I — just knowing that the woman — and just imagining what she looks like with her tongue out licking me and at the same time feeling that sensation is just tremendously hot for me." 14

Don't Take the Dogs Away 20

One Winter at Point Alpha Privative 21 22

What the hell kind of deal is it here anyway
How much does it cost 23 and how long can we stay
Should we dance, should we sing, should we curse, should we pray 24
Do I have to hang on every single word that you say
Every hour, every minute, every second of the day
Hey hey hey hey hey hey hey

Ever since I married you I've wondered what it means
That every single shirt I own is burst out at the seams
Every single piece of clothing,27 every last pair of jeans
All the reds, all the whites, all the yellows, all the greens 28
And I'm sure that there's a reason all of this is happening
Hey hey hey hey hey hey hey

You say these rocks are treacherous
But how long has it been since you've seen my feet, you see 32
I've got a radio

The jacaranda 39 are wet with color
And the heat is a great paintbrush lending color to our lives
To the air, and to our faces, but I'm going to Alaska
Where there's snow to suck the sound out from the air

Up, yes
In the branches
The purple blossoms go pale at the edges
There is meaning 40 in the shifting of the sap and I see in them traces
Of last year but then they hadn't grown so strong
And their limbs were more like wires, now they are cables
Thick and alive with alien electricity
And I am going to Alaska where you can go blind
Just by looking at the ground, where fat is eaten by itself
Just to keep the body warm 41

Because from where we are now it seems really
That everything is growing in a thousand different ways
That the soil is soaked through with old blood and with relatives
Who were buried here or close to here and they are giving rise
To what is happening,42 or can you tell me otherwise
I am going to Alaska where the animals can kill you
But they do so in silence as though if no one hears them
Then it really won't matter, I am going to Alaska
They tell me that it's perfect for my purposes

Thanks as always to Caliclimber, whose Flickr page provided the album art, and who also amazingly figured out the song at the beginning of Running Away With What Freud Said. Thanks also to Ben Franklin who discovered the source of the audio at the beginning and end of Going to Alaska.