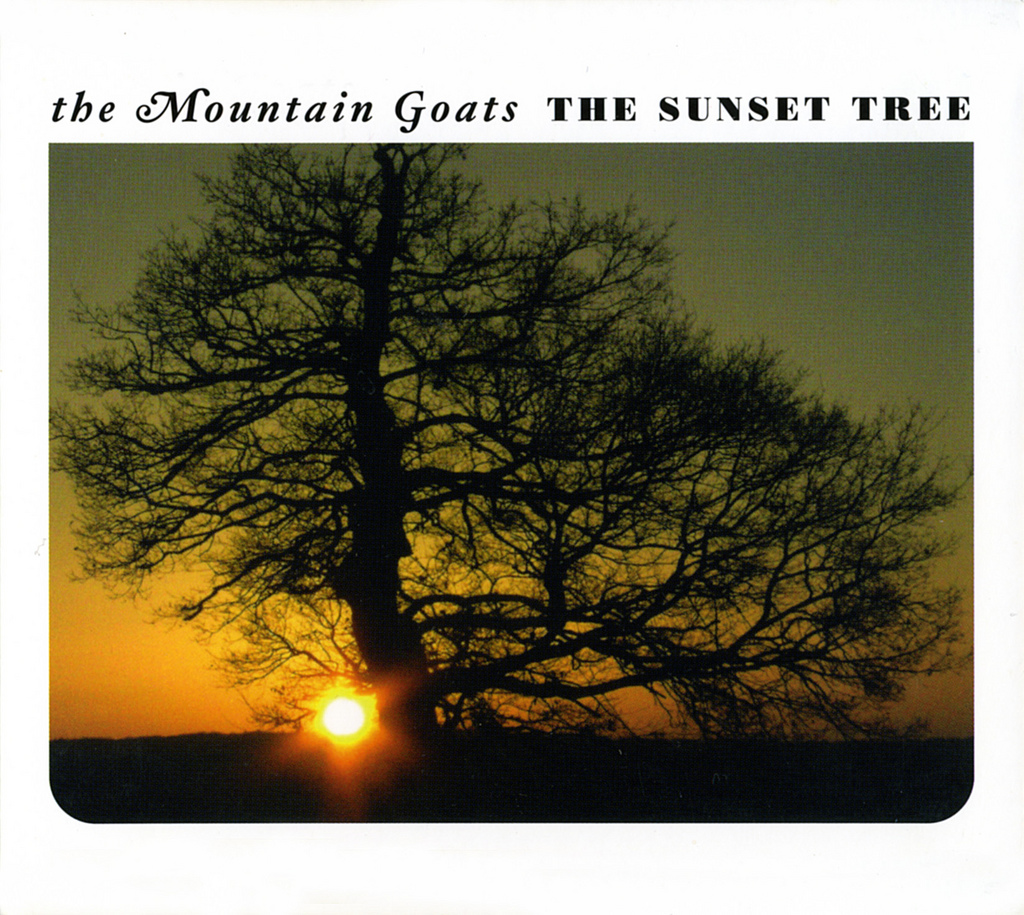 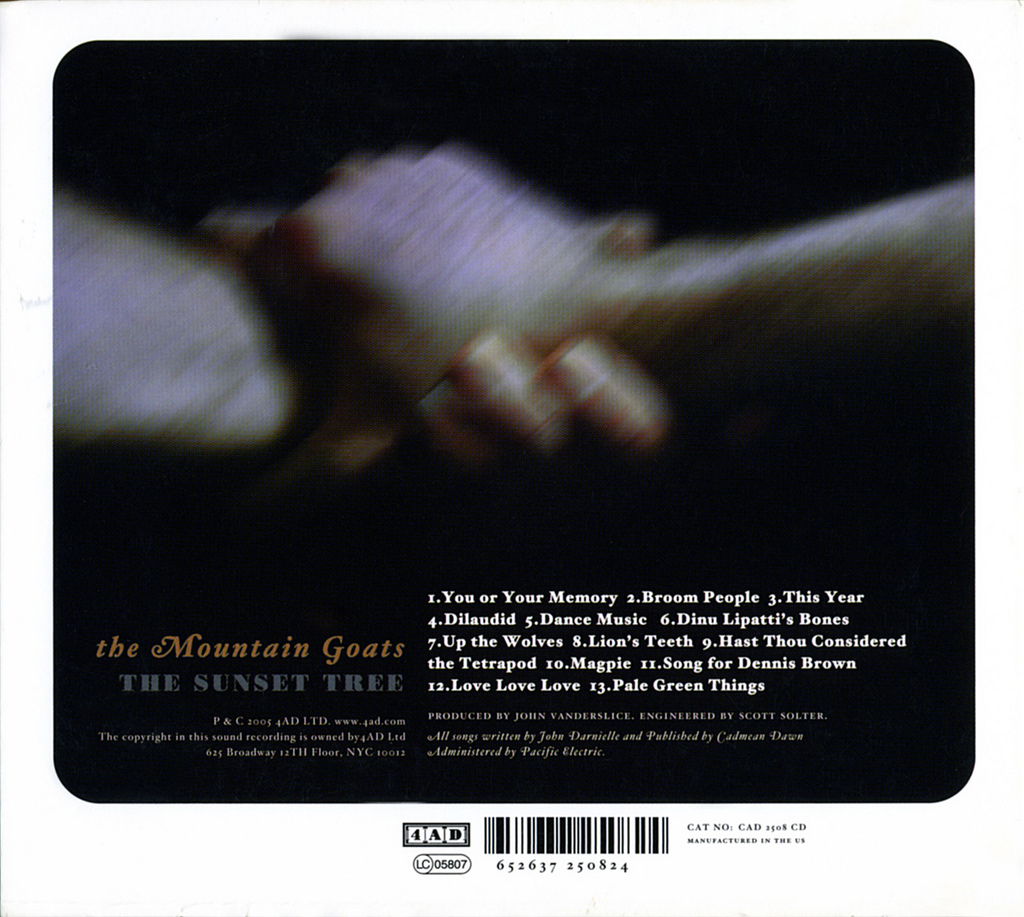 "The howling of the wind in the window... Uncle Balt yelling... Several sounds that bombs make... The eerie echoes you sometimes get in caves... They get replayed." William H. Gass 4

Made possible by my stepfather, Mike Noonan (1940 – 2004):
may the peace which eluded you in life be yours now

Dedicated to any young men and women anywhere who live with people who abuse them, with the following good news:
you are going to make it out of there alive

you will live to tell your story

Early preorders of The Sunset Tree came with a bonus LP, called Come, Come to the Sunset Tree, which included demos of many songs (You and Your Memory, Up the Wolves, Dilaudid, Dinu Lipatti's Bones, Love Love Love, Lion's Teeth, This Year, and Song for Dennis Brown) and several outtakes (Collapsing Stars, High Doses #2, and The Day the Aliens Came). A single of Dilaudid was also released, which contained an alternate version of Dilaudid and a studio version of Collapsing Stars. Two unreleased outtakes exist, Abandoning My Father Talking Blues and Song for My Stepfather.

I checked into a bargain-priced room on La Cienega 8
Gazed out through the curtains at the parking lot
Walked down to the cornerstore just before nightfall in my bare feet
Black tarry asphalt, soft and hot
And when I came back, I spread out my supplies
On the counter by the sink, looked myself right in the eyes

St. Joseph's baby aspirin 9
Bartles & Jaymes 10
And you
Or your memory

I ducked behind the drapes when I saw the moon begin to rise
Gathered in my loose ends, switched off the light
And down there in the dark I could see the real truth about me
As clear as day, Lord, if I make it through tonight
And I will mend my ways
And walk the straight path 'til the end of my days

St. Joseph's baby aspirin
Bartles & Jaymes
And you
Or your memory

'36 Hudson 12
In the garage
All sorts of junk
In the unattached spare room
Dishes in the kitchen sink
New straw for the old broom
Friends who don't have a clue
Well-meaning teachers
But down in your arms, in your arms
I am a wild creature

My broken house behind me and good things ahead
A girl named Kathy wants a little of my time
Six cylinders underneath the hood crashing and kicking
Ah-ha, listen to the engine whine

Then Kathy showed up and we hung out
Trading swigs from the bottle all bitter and clean
Locking eyes, holding hands
Twin high-maintenance machines

I downshifted as I pulled into the driveway
The motor screaming out, stuck in second gear
The scene ends badly as you might imagine
In a cavalcade of anger and fear

All the chickens come on home to roost
Plump bodies blotting out the sky
You know it breaks my heart in half, in half
When I see them trying to fly
'Cause you just can't do
Things your body wasn't meant to
Hike up your fishnets 30
I know you
If we live to see the other side of this
I will remember your kiss
So do it with your mouth open
And take your foot off of the brake
For Christ's sake

All right, I'm on Johnson Avenue in San Luis Obispo 32
And I'm five years old or six maybe
And indications that there's something wrong with our new house
Trip down the wire twice daily
I'm in the living room watching the Watergate hearings 33
While my stepfather yells at my mother
Launches a glass across the room, straight at her head
And I dash upstairs to take cover
Lean in close to my little record player on the floor
So this is what the volume knob's for
I listen to dance music
Dance music

OK, so look, I'm seventeen years old 34
And you're the last, best thing I got going 35
But then the special secret sickness starts to eat through you
What am I supposed to do, no way of knowing
So I follow you down your twisting alleyways
Find a few cul-de-sacs of my own
There's only one place this road ever ends up 35
And I don't want to die alone 36
Let me down, let me down, let me down gently
When the police come to get me, I'm listening to dance music
Dance music

There was no money, it was money that you wanted
I went downtown, sold off most of what I owned
And we raised a tower to broadcast all our dark dreams
From Dinu Lipatti's bones 42

There's bound to be a ghost at the back of your closet
No matter where you live
There'll always be a few things, maybe several things
That you're gonna find really difficult to forgive

There's gonna come a day when you feel better
You'll rise up free and easy on that day
And float from branch to branch, higher than the air
Just when that day is coming, who can say, who can say

We're gonna commandeer the local airwaves
To tell the neighbors what's been going on
And they will shake their heads, and wag their bony fingers
In all the wrong directions, and by daybreak we'll be gone

I'm gonna get myself in fighting trim
Scope out every angle of unfair advantage
I'm gonna bribe the officials, I'm gonna kill all the judges
It's gonna take you people years to recover from all of the damage

Nobody in this house
Wants to own up to the truth
I crawl in shotgun and reach into his mouth
Grab hold of one long, sharp tooth

And hold on
For dear life
I hold on

Well, course he wakes up
His paw hits the horn
I am gonna regret 50
The day that I was born

I hold on
For dear life
I hold on

But I do wake you up, and when I do
You blaze down the hall and you scream
I'm in my room with the headphones on
Deep in the dream chamber
And then I'm awake and I'm guarding my face
Hoping you don't break my stereo
Because it's the one thing that I couldn't live without
And so I think about that, and then I sort of black out
Held under these smothering waves
By your strong and thick-veined hand
But one of these days
I'm gonna wriggle up on dry land

On the day that Dennis Brown's lung collapsed, spring rain was misting down on Kingston 65
And down at the harbor, local cops were intercepting an inbound shipment
And for a while there it was chaos
As they handcuffed and then roughed up some sailors

On the day that Dennis Brown's habits caught up with him, schoolchildren sang in choirs
And out behind the Chinese restaurants, guys were jumping into dumpsters
And the stench was overbearing
But they were past the point of caring

And when the birds come home in spring, 66 we will fill them full of buckshot
And jets of contaminated blood will cloud the rivers and the lakes
It took all the coke in town
To bring down Dennis Brown

King Saul fell on his sword when it all went wrong 69
And Joseph's brother sold him down the river for a song 70
And Sonny Liston rubbed some Tiger Balm into his glove 71
Some things you do for money, and some you do for love, love, love

Raskolnikov felt sick, but he couldn't say why 72
When he saw his face reflected in his victim's twinkling eye
Some things you'll do for money, and some you'll do for fun
But the things you do for love are gonna come back to you one by one 73

Love, love is gonna lead you by the hand
Into a white and soundless place 74
Now we see things as in a mirror dimly
Then we shall see each other face to face 75

And way out in Seattle, young Kurt Cobain
Snuck out to the greenhouse, put a bullet in his brain 76
Snakes in the grass beneath our feet, rain in the clouds above
Some moments last forever, but some flare out with love, love, love

My sister called at 3 AM
Just last December
She told me how you died at last, at last
And that morning at the racetrack was one thing I remembered
I turned it over in my mind
Like a living Chinese finger trap 79
Seaweed and Indiana sawgrass 80
Pale green things
Pale green things

Thanks also to Caliclimber, a nearly mythical being, whose excellent Flickr page provided the album art and for providing a MIDI version of the Tyrolese Evening Hymn, and to Harrison Lemke for pointing out the Biblical reference in Magpie.